About 150,000 women served in the Women’s Army Corp (WAC) during World War II. My Aunt Babe (real name of Claudia) was a proud officer in those ranks. In 1943, it was still uncommon for women to join the armed forces. in fact, many people at the time believed “true ladies don’t join the military.” That line of thinking never deterred Aunt Babe. 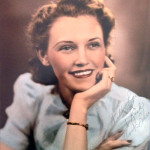 In response to a thank-you note I sent her as a youth, she mailed me a letter – all the way from her home in San Francisco! To a rural Oklahoma kid, that was way cool. So began a long relationship with a world-travelled WAC from whom I learned a lot.

That first letter turned into hundreds. She always typed hers sans errors, the Army way. She mostly wrote weekly, typing pages and pages. Her stories were filled with routine musings. Sometimes, she’d mention her WAC tours in Africa, Europe and Asia. Occasionally, she’d feature family dirt or highlight a family member I knew little about. These regular missives continued until her passing. They instilled in me the value of ongoing communications.

She helped teach me manners. Couth, attire and courtesy were on her front burner during every outing.

She helped me understand trust. She turned me loose in many San Francisco neighborhoods. I never veered from our agreed path, though temptations were bountiful.

She taught the value of friendship. She, her military comrades and friends were fiercely loyal to each other.

She believed in her fellow service members, past and current. She hoped that her generation’s passion for professionalism would carry on.

I was privy to experience how her hope has been realized. On a recent flight, I sat next to Private Gonzales. He’d been in Afghanistan for a long time. The last few weeks had been especially rough. All he could talk about was seeing his family. Though dead tired, he could barely contain his excitement.

Gonzales practically ran up the jetway as we deplaned. Waiting in the departure lounge was an elderly gentleman in a wheelchair. As we passed, he saluted the private. Instinctively, Gonzales stopped. He returned the salute. He then knelt to shake the senior’s hand and visit. It was much later when he made it to the lobby and his cheering family.

Aunt Babe would have done the same thing. She and countless other veterans before her and since, set the examples upon which Private Gonzales acted. With his actions, Gonzales demonstrated that respect and professionalism are alive and well among our service members.

If you’re a veteran, thank you. If you’re not, thank as many as you can today.

To learn more about women serving in the armed forces, please visit the Women in Military Service for America Memorial.

Leave a Reply to Rick Purnell